Why have an Observer Corps?

The LWVSLP Observer Corps encourages us to be informed and active citizens in local government, fosters increased understanding of major local issues, and creates the potential to effect public policy through education of other local League members through the sharing of our observations in the Voter.   Advocacy is an important part of LWV at all levels. We can only advocate for what we know about and understand.   By regularly attending public meetings of local governmental agencies, the Observer Corps members keep elected officials aware of the organization’s interest in local government and helps all the organization’s members be better informed citizens through reporting on those meetings.

What do Observer Corps members do?

LWVSLP Observer Corps members attend City Council and School Board meetings.  Observers wear a League Observer button while attending meetings  to clearly identify them as a member of LWVSLP.  New Observers might want to use a form to help with note taking.  Notes include anything the observers decides is significant, including but not limited to particular items that the the board has requested the observers to note. Notes from the meeting should be emailed to either the Observer Corps Co-ordinator or the Voter editor.

What Do We Mean by "Observing"?
OBSERVING is a passive function. (It is NOT monitoring.)

In other words, an observer is an individual who attends a governmental meeting, listens, and records the events or facts of the meeting and reports back to the organization but does not comment while at the meeting or participate in the meeting in any way.

Greeting Council and School Board members before or after the meeting to introduce yourself as a LWVSLP Observer Corps observer recommended.  The council and school board members have said how much they appreciate our local League and are pleased to have us attending their meetings. However, avoid commenting on the content of the meeting except to get clarification for your notes if necessary. When you are wearing the Observer button you are a representative of LWV, a non-partisan political organization and must protect the League's non-partisanship. If you want to participate in a City Council Meeting, you certainly can but as an individual (when not wearing the Observer Corps button or anything else portraying you as a LWV member). This way, it is clear to all that you are speaking for yourself alone and not for the League.

​
For a list of SLP City Council Meetings and SLP School Board Meetings, see the LWVSLP Calendar. 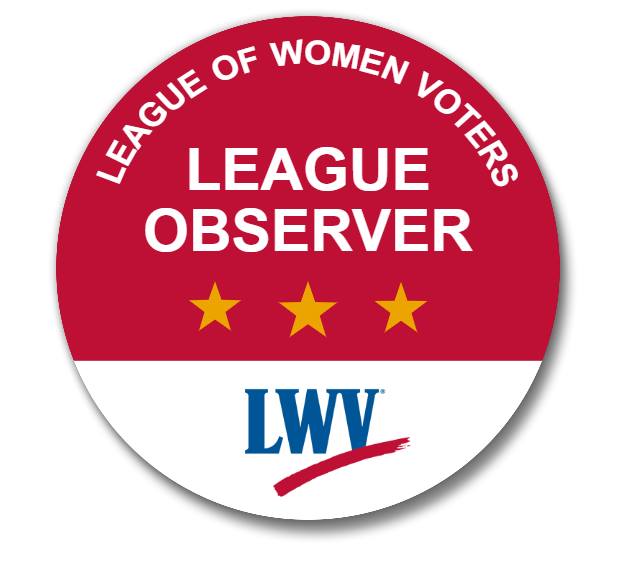